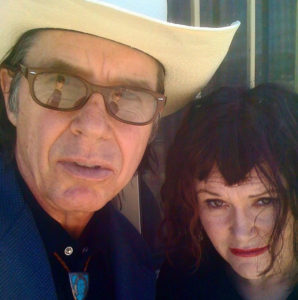 “X emerged from the L.A. punk scene as the most critically lauded American band of the early ’80s. X helped to vindicate the West Coast scene, which had lagged behind New York and London’s early punk and new-wave movements. But while X’s music then was properly labeled as punk, the music and lyrics were more sophisticated than the hardcore sound that would later define the genre. And for all the speed and thrust of their playing, X claims roots in rockabilly and old-time country music, which echoes in the vocal harmonies of John Doe and Exene.” – Rolling Stone

Now in their 40th year, X has been called “L.A.’s least likely iconic band.” – L.A. Weekly.  Exene and John Doe will present their music in an acoustic set.

“What can be romantic to Mike Watt?”

This question is from the song “One Reporter’s Opinion.” It first appeared on “Double Nickels on the Dime,” the Minutemen’s acclaimed 1984, 45-track, two record release; often named among the best and most influential albums of the 1980’s. At the time of the song’s recording, this query may have seemed rhetorical, as the band was an integral part of Los Angeles’s explosive early punk and hardcore scene. By 1984, The Minutemen – – Mike Watt on bass, guitarist D Boon and drummer George Hurley – – had already earned a reputation for fierce, rapid-fire performances. Their songs were abrupt gusts of genre-bending music, with concise, satirical lyrics that probed and skewered topics like Reagan era politics and commercial popular culture.

Yet nearly 30 years later, this question continues to haunt Watt, although it’s long been freed of any presumed irony. In the intervening years, it has become increasingly evident that much of this bass player, songwriter and “spieler’s” life is in fact very romantic to Mike Watt.

Psych punk grunge post future rock + roll whatever band born and raised in LA, CA and taking the world by storm with the wild energy of their live shows and with their Ty Segall produced, self-titled debut LP, released in Spring 2016 on Castle Face Records (LP/CD) and Burger Records (cassette). Sophomore album due out Spring 2018!!!

Proceeds from the concert will help enable Palos Verdes Art Center to expand art education programs for neighboring communities of the Port of Los Angeles.